Wow! We picked up a top accolade at this year’s Community Radio Awards, and won more awards than any other community radio station in the country. 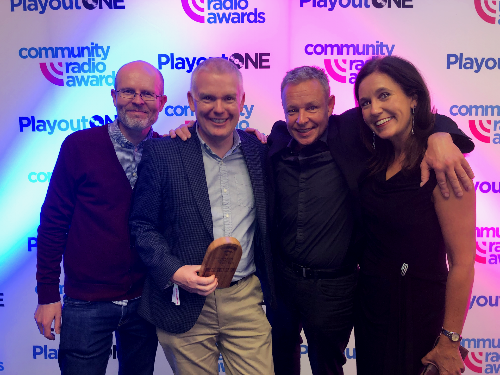 We walked away with a total of four awards. We won gold for our response to the coronavirus pandemic, which included running the Hidden Heroes awards and broadcasting the Marlow’s Quiet Night In fundraising event. The Marlow Christmas Drive-In won silver in the outside broadcast category, The Rock Shop with Michelle Livings took silver for specialist music programme, and Amelia Slaughter won bronze for female presenter.

It’s quite an achievement - our first ever gold, and the most awards! We’re a very small station, from quite a small town, but we like to think we pack a punch. A huge thank you to everyone at the Community Radio Awards, all our hardworking volunteers, but most of all our listeners.

We had received a total of seven nominations, with presenters Angie Burns and Edan Gaskell and Marlow FM’s new mobile phone app also in the running for awards.

The ceremony took place on Saturday 23 October at the Coventry Transport Museum, as part of the UK City of Culture celebrations.

More than 430 entries from stations around the UK were whittled down to five per category. You can see and listen to all of our entries here.

In a video played at the start of the awards, Nadine Dorries, Secretary of State for the Department of Culture, Media and Sport, mentioned Marlow FM when commenting on the huge variety of nominees.

[In the photo above, from left to right, Marlow FM volunteers Luke Morton, Graham Duthie, Edan Gaskell and Angie Burns.] Marlow FM gets most nominations in national radio awards

We’re chuffed that we’ve been nominated for a total of seven Community Radio Awards this year, more than any other community radio station.

We’re proud to be taking part in the Fighting With Pride charity’s awareness campaign this week.